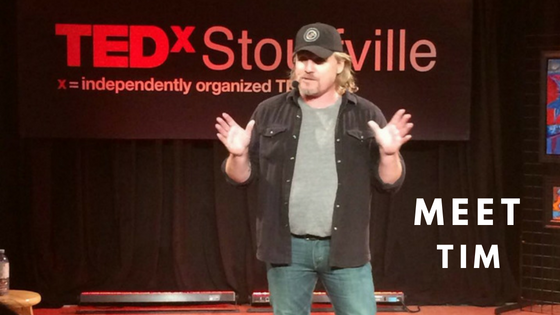 The Compassion Series came about as the culmination of Tim Huff’s decades of service to and friendship with those living on the margins of society.

We asked Tim a few questions to help you get to know him a bit better.

What do you want to be when you grow up?
I’d love to do radio as an “all grown up now” career. Rock radio and Talk radio both seem very fun and interesting to me! As I boy I dreamt of being a career cartoonist. As a teenager, I wanted to play in a touring and recording rock band full time. Though these never became full time gigs, I find some happy comfort in that I have been able to do a bit of both these things along the way in some quasi-respectable way.

What are you NOT very good at?
I’m a brutal cook. Hmmm, my dear family would likely say I’m a “non-cook”. Sigh. But alas, I’m super blessed to be married to a great cook.

What inspires you?
Lots and lots. I love biographies and autobiographies about classic rock musicians who found their way to “success” by dreaming big and working super hard, especially when everyone around them thought they should quit. Stories about artists in general are great, but I have a special affection for classic rock musicians’ stories.

What’s the last book you read?
Last book I read was “Light and Shade: A Discussion with Jimmy Page” (Guitar superstar and founder of Led Zeppelin).

What is the funniest thing that has happened to you recently?
I went to check into a hotel as a guest, and the front desk clerks greeted me as soon as I entered by telling me how glad they were I had finally shown up. They thought I was the service guy they called to fix the plumbing in the lobby.

What’s the last album you listened to?
“Moving Pictures” by Rush.

You’re a new addition to the crayon box. What color would you be? Why?
I like to think I’d be some kind of happy yellow, just because the hope is always to be a someone that might bring light into darkness. Most days I think that sounds about right and I’d like to think I might be some kind of sunny tone. But, I am not too proud to say I might show up as a shade of blue on any given “what crayon are you” day. On the flip side, I am quite certain I would not be magenta or seafoam.

How would you describe the color yellow to somebody who is blind?
Hammock time in late June, face to the sun, sipping lemonade.

What’s your favourite movie? Why?
My favourite movie is the original Planet of the Apes from 1968. As a kid it was the very first movie to truly freak me out and intrigue me all at the same time, then as an adult it was wild to explore how all the themes aligned with then-current 1960’s social justice issues in the US.

You step outside and find a lottery ticket that ends up winning $10 million. What do you do?
Not post it on facebook. Take the day off. Go to Dairy Queen. Be generous.

What were you like in high school?
In grades 9 and 10 I was kind of shy and withdrawn at school, though not so much at home. At school, the art room was my sanctuary and happy place. I had great art teachers who brought out the best in me in many ways – Mr.D’Angelo, Mr. Bevan, Ms. MacIntosh, Ms. Duncan. To this day, I am so thankful for them.

Grades 11, 12 and 13 (yeah, there was grade 13 back then!) I was much more outgoing and confident. I know that when asked “would you go back and do it again?” most people answer “no,” but I am a “yes” guy to that question. There’s lots I would go for now that I wish I had the first time around. I do not have any major regrets, I just know better now. Plus, I really liked the late 70’s and early 80’s in general.

What is your favorite word?
Good.

What sounds do you love?
1. The sound of a live band playing in the distance, before I can even see where it is coming from.
2. Our big ol’ black Labrador Retriever letting out a great sigh when lying down to sleep.
3. The sound of a passing train in the middle of the night.

If you could be any animal in the world, what animal would you be? Why?
I am a big fan of wolves; I really love dogs, and the wolf being the wild and free member of the dog family seems happy-making. Of course, not sure how anyone couldn’t have “eagle” among their top considerations. The whole flying thing plus the revered species thing and the no-natural-predators thing is all pretty cool. Hmm, both of these choices sound uber-Canadian, eh? I wouldn’t really want to be a puffin – but I do think it would be fun to say I was a puffin. And they are very cute. And I bet no one ever picks “puffin.”

What would you like to hear God say when you arrive at the pearly gates?
“Most of your best attempts were at least near the mark. Welcome home.”

If you could send a message to yourself 10 years ago, what would you tell the younger Tim?
Eat more fruit.